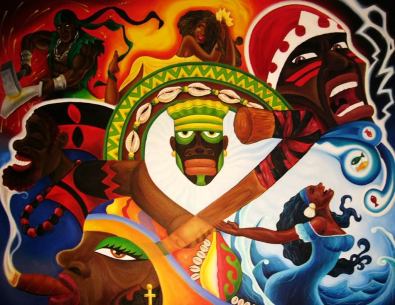 In one of my earlier pieces, I talked about the Afro-Cuban turn of the dance of casino. In it, I reflected on the recent incorporation of Afro-Cuban dances (mainly rumba) into the dance of casino that is seen, time and again, in workshops all around the globe—and a growing number of YouTube videos. I argued that this mixing of rumba with casino was the result of the market rather than an accurate representation of how casino is danced in Cuba. That is, Cuban instructors trained in the Afro-Cuban dances at the National School of Arts (ENA) would leave the island and, when attempting to teach outside of Cuba, they would find that the only viable way to really teach Afro-Cuban dance would be through what people already danced, with music they were already comfortable dancing: casino and son, respectively. Therefore casino lessons, mixed with rumba and other Afro-Cuban dances, began to be taught, as a way of introducing people to Afro-Cuban dancing. But again, this did not reflect how casino was danced in the island. In other words, this was some sort of exotic fantasy of Cuban dance—and I say ‘exotic’ due to what is being sold to whom; that is, Afro-Cuban dance to a white, European public.

(Before I continue, let me say that some people in the island do mix casino with rumba—in the sense that they stop dancing casino to dance rumba—but there are very few who do this. In fact, if you were to watch clips from the show Para bailar casino you will not find a single dancer breaking off their casino to dance rumba. But what’s happened is that many instructors teach this casino mixed with rumba as if everybody in the island danced like that—and the students just eat this up unquestioningly.)

All of this said, let us now turn to the about Orisha dances, which is also part of the Afro-Cuban dance tradition.

Recently I wrote a piece for the Latin Dance Community blog. It was a piece which essentially summarized what casino was and condensed—very heavily—a lot of the things I say here. The reason I bring this up is because in this blog there was an article that I found interesting for reasons I will explain below. It was called “An Introduction to the Orishas” and it was written by someone who started noticing that the Orishas (African gods) were being mentioned, time and again, in many of the songs which he listened to. So he set out to explain, very briefly, the Yoruba religion and give a very small list of the deities, following this with songs in which they were named. After doing this, he concluded the following:

The next time you are listening to salsa music, see if you can identify when the Orishas are mentioned or if you are up for a challenge, looks up some of the dance movements that are associated with the various Orishas and incorporate them into your dancing. Doing so will help you to increase your appreciation for salsa music and dance. (My emphasis.)

First, it was interesting to me that someone from the salsa community was taking an interest in Afro-Cuban dancing, especially considering that no other dances from Cuba get taught at salsa congresses/events. But I was not surprised. For some time now, I have noticed a trend in the salsa community: they want “Afro-Cuban body movement” lessons. (I guess they got tired of doing shines when they break off from partner dancing, and now are looking for the next cool thing to do. Whatever the case, the interest is there.)

Of course, the other thing that was interesting was his advice: incorporate Orisha dancing into salsa dancing when you hear them called out in the song, he suggests. In the Cuban dance community, similar advice is given, I believe, again, as a way of making it relevant to the dancers who are having the very logical question: “Why is learning this important?”

So why is it important to learn Orisha dances? Well, unless you have a genuine interest in the Yoruba religion and actually believe in these gods, I wouldn’t know how to begin to tell you how this is important to your casino dancing—because it really isn’t.

Let me explain what I mean. Unlike rumba, which is secular, Orisha dances are religious manifestations of the Regla de Ocha (also known as Regla Lucumí/LuKumí). The dances embody the personalities and role of each Orisha. That means that, when you’re dancing an Orisha dance, you’re embodying an Orisha god.

The other reason I do not do Orisha dances, or incorporate them into my casino, would be more practical: the case is rare when a song actually has an Orisha section, with the instrumentation and everything. Let me give you an example. Listen to the song below, which is a song for Changó, the god of dance, among other things. Can you recall a song you were dancing casino to that even remotely sounded like this? I’m sure the answer for most of you—if not all—would be not—though if you can think of examples, please let me know in the comment section below:

Going back to what the article on the Orishas I mentioned above was saying, yes, it is true that every now and then the Orishas get mentioned in the songs. The best example of this would be Adalberto Álvarez’s “’¿Y qué tú quieres que te den?” which essentially tells the story of a religious gathering and then does a run-through of the Orisha pantheon. But even then, the song does not change into what you just heard above, which means that even though Orishas are being called, based on the instrumentation of the song, I do not have to start dancing an Orisha dance. I can still dance casino. In fact. the following video makes my point just perfectly. This Elio Revé song, “Agua pa Yemayá” (Water for Yemayá) is essentially a song about said goddess. But look at the dancers (many of them black). What are they doing? I´ll tell you what they are not doing: they are not doing any Orisha dancing. Why? Because people in Cuba know a religious dance has its place in society, and a context, and neither its place nor context is the dance of casino (unless it is a song like this one, where dancing Orisha would make sense, though I would personally sit out the section).

My third reason as to why I don’t incorporate Orisha dancing into my casino has to do with respect. I just consider it disrespectful, doing Orisha dances, to those who actually believe in the religious sanctity of these dances. I don’t know about you, but if I believed in Jesus Christ, for example, and there was a “Jesus Dance” that had a religious purpose, and I saw people doing it, and I knew these people were doing it because it was the “cool thing to do” even though they did not believe in Jesus Christ—if that was my case, I would feel pretty offended.

I know some of you reading this may be saying, “But a lot of Cuban instructors who believe in the Orishas teach the Orisha dances at dance congresses/events. They do not feel offended. Why?”

That’s a good question, and it really comes down to how you feel personally about the matter. Many Cuban instructors do teach the Orishas as their own dance–that is, without mixing with casino. But why they would teach people who do not believe in the Orishas how to impersonate an Orisha god, I do not know the answer to that. Maybe if one of them reads this, they can tell me down below in the comment section why it is okay to teach a religious dance to the general public who does not believe in said religion. (I want to make clear that I am not opposed to instructors teaching Orisha dances. There should be a space for people who believe in the Yoruba religion to learn these dances.)

Then there are instructors who teach to incorporate Orisha dancing into the dance of casino, like these two who–surprise, surprise (or not really)–are graduates from…that’s right: the National School of Arts (ENA). Take a look, and pay special attention to their Orisha breaks (0:20-0:27; 0:42-0:50; 2:24-2:30):

With these two, anything goes, essentially. From rumba breaks to Orisha ones. And their Orisha breaks are decontextualized–that is, the song itself is not even calling for Orishas, and then they are doing three different Orisha dances, just because. Watching this, I don’t get what is happening in the dancing. All I can think of is that these two decided that the best way to let the public know that they teach Afro-Cuban dancing, too–because this is a promotional video of sorts, just look at the description of the video and the comment section–was to do every Afro-Cuban thing they could think of when dancing casino. Again, we should see this for what it is: a marketing strategy, not a representation of how casino is danced in the island, either by blacks or whites.

Don’t believe me? I have tons of videos to show you, then. The link will take you to another page, where I compiled videos of people in Cuba dancing casino. Mind you, these are not instructors in a workshop/promotional video setting. These are regular Cuban people (most of them black) dancing casino. Let me know if you see any Orisha break in their dancing.

And speaking of marketing strategies, here is something else to think about: Why is it that you never see Orisha dancing done in any son performance/dancing? And it’s not for lack of reference. Even the earliest son recordings from the 1930s done by Sexteto Habanero had percussive elements of the Abakuá tradition in the way they played the bongo, and they’ve been singing to the Orishas in son music for a long time, too. So why don’t we see Orisha dancing in son dancing? Could it be that this is just simply a marketing strategy to get people interested in dancing these dances by inserting them into the mainstream (casino, rueda de casino)–and by extent sell lessons? In my experience, I have found that, when it comes to Cuban dancing, most roads lead to Money.

The other day I saw a video on Facebook. It was a shot from afar of a group of women at the beach shore, dressed in white and dancing to Yemayá, the goddess of the sea. That really put a smile on my face. Seeing that, I thought, “That is what Orisha dancing should be.”

And then I thought of the countless times I have seen people do Orisha moves on the dance floor, without a context, just because someone taught it to them as something they could add to their casino dancing. Because someone told them that when an Orisha is called in a song—because those who are singing actually believe in the Orishas—they should do the corresponding Orisha dance, no matter whether or not they believe in the Orishas. To those who do this, I say, “Dance to the song above. See if you like dancing to that music.” (Most people won’t, as they only do this because it’s the cool, exotic thing to do on the dance floor that can go along with music they already like. But once you really put some real “Afro” into it, once you take out the European musical tradition–the piano, guitars, trumpets–and it’s just the batá drums, let’s see how much they like dancing to it.)

Perhaps then they’ll realize this is not a “cool” thing to do, but something that should be respected for what it is: a religious dance.