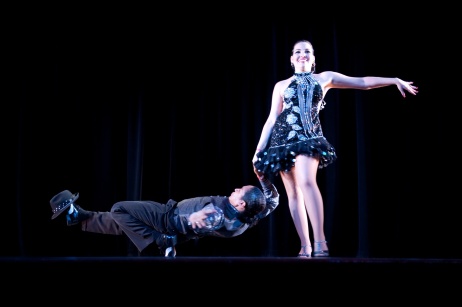 Connecting to the music is one thing I strive to do when I dance. I think we all should. I always say to people, “Dance to the music, not because the music is playing.” Indeed, if all you need is music to dance casino or son, well, you really don’t need Cuban music. Michael Jackson does the job just fine. But if we’re going to dance to Cuban music, specifically to son montuno (what we call “salsa” or “timba”), the least thing we could do is have a little bit of an understanding of how it is structured, of how it works, so that we might enjoy it better.

So let’s talk about the tornillo, what it is, and how to incorporate it into the dancing.

Tornillo, which in Spanish means “screw,” is a dance move which comes from son, a predecessor to casino. The move consists of either the leader or the follower standing/sitting in place while the other partner walks around, in a clockwise or counterclockwise manner, and rotates the person—like a screw—in place.

To date, this is the best demonstration of the many ways one can do a tornillo:

Now, tornillos are part of son dancing. That’s where you’ll see them a lot. In casino, however, they are not as common. One could argue that this is due to how the structure of son music has developed throughout the decades, which I will talk about a little more below. One could also argue that it is due to the fact that not a lot of Cubans know how to actually dance son and, by extent, do a tornillo. Both would be, more or less, correct.

But I really want to focus on the music here. So let’s do that.

We’ve already seen the typical structure of a son song. It has an introduction, and a montuno. That’s, at its very core, what happens. (You can find a more detail explanation about what that means here.) However, in the montuno, many things can happen. One of these things is a solo from either the tres player (if it’s more traditional son), piano, timbal, tumbadora, etc. During this solo, pretty much all instruments quiet down (you’ll specially notice that the cowbell doesn’t play), letting the sound of a single instrument take over. The song becomes calmer, loses the upbeat tempo characteristic of the montuno. In the following son by Septeto Santiaguero, you can see that happening from 2:46 to 3:10:

It is during these solos that the tornillo should happen. Notice that I am not saying that you have to do a tornillo during the solo section only. People will—and do—whatever they want, when they want. All I’m saying is, if you want to be more musically inclined when you dance, the solos are the sections where you should insert your tonillos.

Why? Well, musically, during this section most of the instrumentation quiets down. So, trying to do turn pattern combinations at this point, much like during the introduction, looks out of place. The tornillo provides the opportunity to also “quiet down” our dancing—what can be “quieter” than standing in place? In other words, the tornillo allows us to respond to what is happening in the music.

Take, for instance, these two videos. You will notice that the tornillos happen only during the solos.

With this in mind, let’s reconsider one of the most popular songs from Los Van Van’s repertoire, “Sandunguera”. I’d argue that, to modern casino dancers, this song can turn out to be very boring to dance to, especially from 3:36 to 4:57. And with reason: there are not one, but two solos in this song:

From what I’ve seen personally, if people had to dance to a song like “Sandunguera”, during the solos, many would try to do what they have seen people do in the salsa dance community: shines. That’s how salsa dancers approach solos: they break off and do shines. But shines are not that popular for Cuban dancers. I mean, you can certainly see people doing some cool footwork, but breaking off from the partner and doing shines? That’s not a common sight among casineros.

Then again, tornillos aren’t a common sight, either, mostly because, like I explained, tornillos belong more in the dance of son than in casino due to the fact that solos are more common in traditional son music. Indeed, there aren’t many modern Cuban songs which have solo sections.

But at least now you know what to do if you do find yourself dancing to a song with a solo section. Now, tornillos are not that easy to do. So, if you do not know how to do them, that’s fine. My recommendation is to stick to closed position, move around the room with your partner. Don’t do any crazy turn pattern. That’s what I personally do (start the video at 2:04):

(What I am actually dancing in the above  video is son montuno. If you want to know more / are curious about this dance, check out this earlier post.)

All this said, there are times where doing a tornillo with more modern songs feels fine, in the absence of a solo. This one is more of an intuitive thing for me, so I don’t have an explicit explanation as to how to know when the “right” time to do a tornillo comes around. I just “feel” it (gee, thanks!).

Now, I do want to make clear that if you like doing tornillos that much, you can do a tornillo whenever you want, just like you can go crazy with the turn patterns as soon as this song starts. I’m simply advocating for what makes more sense to do, based on what is happening in the song.

7 thoughts on “Musicality: Tornillos, and When to Do Them”