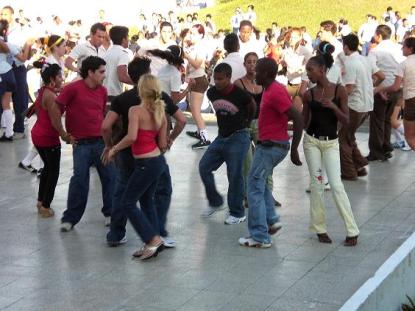 Not every song is good for doing a rueda.

First, this is implied every time you take a Cuban dance class when they do not play any music by non-Cuban musicians (with the exception of Calle Real or Mayimbe). That is: when they don’t play “salsa.” Many instructors and/or Cuban music aficionados go beyond implying something and explicitly say it: one cannot do a rueda to “salsa” music. It simply doesn’t have that “thing”—they argue—that makes you want to move your body and get down with the music. It’s missing that humph that Cuban music has.

In a way, they are right. Music from 50 or 40 years ago—which is what gets played, mostly, in the salsa scene—doesn’t have the same feel that current Cuban music—what people call “timba”—has. I mean, just take a listen to this one:

Doing a rueda to the above song certainly feels out of place when all you’re used to dancing is more current Cuban music. The current stuff is what your mind has learned to associate with the rueda. Because that’s what instructors play during their lessons. Because that´s what DJs play at dance socials.

And because of this association, we discard anything that does not fit that paradigm of “Cuban music equals timba.” I´ve already extensively talked about the slippery slope that constitutes seeing Cuban music in such a monolithic manner here. So I will only say this here: just because it doesn´t sound like what you´re used to listening, it doesn´t mean it´s not Cuban music. Indeed, the above song is a cover of a Cuban song! The original is by one of the most successful Cuban music bands of the 50s, Conjunto Roberto Faz:

So why is Roberto Faz´s song not played at Cuban dance socials or classes? I’d argue that it is because it doesn’t fit the narrative of what current Cuban music is. And of course it isn’t current. The song is decades old. But it’s Cuban music nonetheless.

What I am trying to say is that arguing that ruedas cannot be done to a certain music (salsa) because that music is “not Cuban” and therefore doesn’t have the feel of Cuban music—well, that argument falls apart very easily when you consider older Cuban music.

And so a song’s viability as it pertains to doing a casino rueda is not really about whether or not said song is Cuban. What it really is about is what the music is doing and bringing out in the dancer.

To summarize: not every song is good for doing a rueda. But that has little to with its “Cubanness.”

Conversely: not every Cuban song is good for doing a rueda, as we saw with the example of Roberto Faz.

However, I’m going to take it a step further and state: not every Cuban song is good doing a rueda even if it is a more current song.

Once we do away with nationality, the impending question becomes: so what is it that makes a song “good” for doing a rueda?

Well, first we have to examine what we understand rueda de casino to be in order to understand why we prefer a certain music to dance casino in the rueda formation.

For many of us, rueda de casino constitutes what we are taught when we take classes. It’s the group dance in which everyone gets together to do, in unison, a choreographed set of moves that are called in random order by the caller who leads the rueda. While every now and then simple, one eight-count moves are called (i.e. adiós, vacila, enchufla), most of the time what gets called are figures which take more than one count of eight to be executed (i.e. dedo, montaña, setenta, adiós con la prima). If you have read my post on turnpatternitis (which I highly recommend reading before finishing this one), you know that these latter figures go better with the montuno of the song. During this section, the song is doing more interesting things, musically speaking; and so should we with our dancing.

However, as our contributor James Bucklew pointed out in his post about the lack of musicality exhibited when teaching to dance casino inside the rueda formation (read it here), most callers do not pay much attention to what is happening in the song, or what section of the song they are dancing to. And so you get complicated moves from early on, when the song is not really calling for it.

Take this song by El Gran Combo, for instance:

Most people trying to do a rueda de casino would be put off by the slow feel of the first minute of the song when trying to do moves like setenta, sombrero doble, montaña, Kentucky. It simply doesn´t feel “right” to do these moves during the first minute or so. And I’d agree: the song hasn’t reached the montuno yet, which is where most of these moves would find a better fit—both for dancing in the rueda and outside of it.

But fast forward this song to about 1:30 and you´ll get a totally different feel. Try doing the moves I mentioned, and now they won’t feel as forced.

And I repeat: the feeling a certain song is “bad” for a rueda has nothing to do with the fact that the above song was played by Puerto Ricans. Take the following song by Issac Delgado, a renowned Cuban musician, and try to do a rueda to the first two and a half minutes of it:

Quite arguably, the above song is horrible for a rueda. It’s got a very stretched-out introduction that makes it almost impossible to pull off a rueda. It can be done, but the person calling it has to be in total synch with the music—plus the rueda itself has to be made of people that are part of the same group and know their calls, not strangers.

Another example of this, this time by Paulito FG, who, unlike Issac Delgado, is known to be a hardcore timbero. Again: listen to the first two minutes of this song and try to envision a high-energy, crazy turn pattern rueda:

See? It simply cannot happen, at least not in the first two minutes, which is the duration of the introduction section. Once the montuno kicks in, then rueda moves become easier to envision because there is a definite change in tempo during the montuno.

Therefore, when songs follow that closely, no matter if they are Cuban or not, dancing casino in a rueda, with its indiscriminate calling of moves regardless of song section, will feel out of place, weird. It will put you off.

Well, if we are seeing that in every example above, regardless of nationality, it feels “good”—or, at the very least “okay” if you are not a fan of non-Cuban bands— to do the rueda during the montuno sections, then, ideally, a “good” song for a rueda should only have a montuno. Like this one:

There are songs that, even in their introduction, will have a more upbeat feeling to it. Like this one:

That is not to say that there is no demarcation between the introduction and the montuno. In the above song by Pupy y los que son son, at 1:23 you can clearly hear how the tempo picks up as they enter the montuno.

Or “La madrugada” by Elio Revé y su Charangón. Though the song follows the introduction-montuno structure, the introduction is upbeat, and you can, again, clearly hear the entrance of the montuno at 1:11:

Another one from Pupy:

One from Bamboleo, “El maíz”:

These are songs just to get you started thinking about this topic. There are tons more, including non-Cuban ones, which I did not provide here I´m catering here to an audience that is mostly looking for music by Cuban musicians.

Before finishing, I will like to reiterate the following: the label of “good” or “bad” song for a rueda in this post is used in exclusive reference to what tends to happen when ruedas are called nowadays. That is, the moves are called indiscriminately, regardless of the section of the song—when I believe there are certain moves which fit better certain sections. So, if that practice is to continue (calling moves, just because), then at least let’s do it with songs in which that would feel better to do.

If, as a caller, you’re going to call whatever you want, no matter what is happening in the song, then certainly not all songs are good for doing a rueda. In that sense, some are certainly better than others.

But if, on the other hand, you’re going to respect the musical structure and try to match it with corresponding figures, then there really is no song that is “bad” for a rueda.

8 thoughts on “Choosing Songs for Ruedas: Which Are “Good” and “Bad” Songs?”