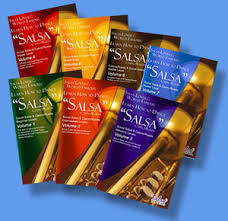 There are three main topics people are usually arguing about in the Cuban dance community, be it among themselves or with others from other dance traditions. These topics are:

This blog has talked about these arguments and made its own case for each one. (For #1 here; #2 here; and #3 here.) So I’m not going to regurgitate what has already been said.

I do want, however, to take a closer look at #3, not as a way of arguing one way or the other, but rather as a way of explaining why this is even an argument that people are having.

In order to do this, we need to examine the following:

You should recognize at the very least 80% of these calls. And here is why: chances are your instructors, directly or indirectly, learned from the same source.

And that source, my dear readers, is the Salsa Lovers’ DVDs (see picture above).

With seven installments ranging from beginner to intermediate to advanced, the Salsa Lovers’ DVD effectively became the standard of the many calls you hear called in the ruedas today, and even what people refer to as “Cuban salsa” or even “casino.” These were among the first DVDs that attempted to teach Cuban-related dances in the United States. Later, thanks to the power of YouTube, these videos quickly became the norm for Cuban dance.

These DVDs were produced by a dance company based out of Miami, which—and this is my own personal take on these DVDs—sought to market to people who wanted to dance salsa a certain way of dancing salsa with some casino principles.

If you’re a new reader of this blog, you might be frowning in confusion at that last statement. Aren’t people who dance casino salsa dancers? Isn’t casino a style of salsa? Aren’t we all dancing salsa, at the end of the day?

Well, no. We are not. Casino and salsa are fundamentally different dances, not to say that both dances are decades apart—casino is a 50s phenomenon, and salsa dancing, in the styles that we know it today (on2 and on1), really became solidified in the early 90s. While you’re free to disagree with me on this for whatever reason, for the purposes of going along with this post, please do keep this difference that I am making in mind as you continue reading.

Now, why do I say that Salsa Lovers “sought to market to salsa dancers a certain way of dancing salsa with some casino principles”? Well, first, their name is Salsa Lovers. That right there is telling you who their dance market is. And second, don’t take my word for it. Take theirs. In their DVDS, they say that are teaching you “how to dance salsa, structured through casino rueda” (second 0:20).

So Salsa Lovers is teaching you to dance salsa, not casino, albeit the salsa dance they are teaching is not the dance-on-the-slot, linear salsa that we all know. They are using the rueda format, which changes things a bit and requires, at times, different principles. So yes, you are going to get turns that do not fall into the linear paradigm of salsa dancing. It’s going to look different than on1  or on2 salsa. You can even argue that they are teaching a different style of salsa, and call it “Miami-style salsa” (which I do), and you’d have a point. Whatever you choose to call it, don’t forget: the DVDs teach “how to dance salsa structured through casino rueda.” In fact, that quote in itself sees casino and salsa as different, separate entities!

And you know what one of the main tenets of salsa is? That’s right: the back step.

In salsa dancing, the back step is so common, people do it unconsciously. In such a constricted, linear dance, the back step serves as a way of mirroring one’s partner. Otherwise, if they were both to step forward, they’d bump into each other. That’s why, when the leader moves forward, the followers goes back. Here is an example of a salsa dancing video. Notice the predominance of the back step:

Now watch it again, but keep the following things in mind. First, notice that, after the Vacila, they step back. But not only that, notice how after the Enchufle, as he is spinning in place, she is stepping in place (0:24-28), maintaining the line, like salsa! Then the follower steps back both on the following Enchufle and the Dile que No.

With the exception of the beginning Vacila, the follower back-stepped all the time!

(Now, if you keep watching these videos, you’ll find that, at time, during certain moves, the girl does go forward. But that happens mostly when she has to go around the guy, in a circle, not a line. Regardless, these instances are very few. What’s prevalent throughout most of the moves they do is the back step.)

I am not saying here that what they do is exactly like linear salsa. There are obvious differences, like the use of Vacila and Dile que No. In strictly-linear salsa dancing, Dedo would look like this:

But if you were to take away the Vacila and the Dile que No from the Salsa Lovers’ Dedo, you’d have the same exact move as the video above!

So: Salsa Lovers not only made popular and standardized the most common calls we hear in a rueda today, they also normalized the back step in casino! These calls borrow heavily from U.S. salsa dancing in the way they are structured, and so does the predominant use of the back step.

You might be saying, “Wait, but I thought you said the DVDs taught salsa, not casino. So how come you are saying they normalized the back step in casino if they weren’t teaching casino to begin with?”

No, they weren’t. But a lot of people—the people who continued the tradition of the Salsa Lovers’ DVDs, which was the majority in the U.S. and abroad—thought they did. Otherwise you wouldn’t hear Salsa Lovers’ calls during the ruedas. Otherwise you would not be taught to step back, nor would you be stepping back. And I get it: we are talking about a two-second clarification made on the second volume of the first DVD. Anybody can miss that. Even if people do hear it, if you’re a beginner who is just getting started, all this nomenclature might have not meant anything to you.

Salsa Lovers’ influence effectively made the back step the normal thing to do.

But then you go to Cuba, which is where casino is from, and this is most likely what you will see when people dance casino:

What you saw in that video, my readers, is an entire different set of principles for dancing casino. For starters, the forward step here is what reigns. Heck, some of the dancers are practically walking!

And that’s why there is an argument about this. Because some people are now aware of the discrepancy that in Cuba people were predominantly forward-stepping, and outside of the island people were predominantly back-stepping when dancing. And casino being from Cuba, it stands to reason that some people want to dance as close as they can to the way that casino is danced in Cuba.

Some people argue that if people are not stepping forward, they are not dancing casino, which is also a little over-the-top. First, it’s not like the back step is a stranger to Cuban dancing. There are very clear examples of dancing with a back step in the Cuban dance of son, for instance:

And you will even find people stepping back a lot in old-school casino! Here is a video from the 80s:

But casino has evolved since the 80s. The forward step predominates in Cuba now. That is not to say that you will never see a back step done in Cuba now. You will, every now and then. And this will often be due to the way the body falls at the end of a turn, or because the leader leads the follower to do it, or a number of other reasons.

What I am trying to argue here is that the casino that is danced in Cuba is danced, predominantly (but not always), using the forward step, which stands in sharp contrast with the predominantly-used (but not always) back step by those who have been influenced, whether they know it or not, by the Salsa Lovers curriculum.

Hence the debate, when it does happen.

(There is also something to be said about why the marketing of the dance as “salsa” aids the incorporation of the back step, given that salsa is a back step-driven dance, and many people already know a little bit of salsa dancing before they start learning casino, so they start dancing casino as they would salsa. But that is a topic for another day.)

Before concluding, I will say that this forward step-back step argument is a high source for tension in the community for the simple reason that, again, most people in the U.S. learned through the indirect influence of or direct contact with the Salsa Lovers’ DVDs. Therefore, admitting, as an instructor of an academy that seeks to teach Cuban dance, that what is being taught wasn’t really meant to be that “Cuban”…well, you lose all your credibility there. So there is a lot of political correctness (PC) around this topic. Just the other weekend, I went to a Cuban dance congress where this topic was addressed in a workshop by one of the instructors teaching there and who is big on the forward step. And so, to teach to forward step without discrediting other instructors, he argued that he was teaching a “different way”, but that both were “correct.”

To each his own. I personally believe people have a right to know where what they dance—or teach—comes from. Whatever they choose to do with this information, that’s up to them. No judgment on my part. I’m just the guy doing the research and giving you the information. For free.

All of this said, I hope this post has clarified a bit more the why of this argument about the back and forward step in casino dancing.

11 thoughts on “Why Is There an Argument About Stepping Back or Stepping Forward in Casino?”